Information from the former management team of Autonomy plc.

Following on from the news coverage relating to the documents which were posted on May 5th, and are available below on this blog, there is a thorough and insightful background piece in The Independent today, by its Deputy Business Editor Ben Chu.

His article focuses on the differences in accounting practices between the US and the UK and includes a quote from Melanie McLaren, executive director of codes and standards at the UK’s Financial Reporting Council, in which she says:

“It is a fact that US GAAP and IFRS, in terms of revenue recognition, are currently on different standards.

“Based on what I have read this seems to be what the [HP] dispute is about. It may be that under IFRS, judgements have been made as to what to recognise when that would have been made differently if you’d been following a more prescriptive US GAAP approach.”

As we pointed out on May 5th, our position has always been clear, that HP’s allegations—drafted with the benefit of a nearly three-year investigation—make no case for fraud. Rather, they evidence, at best, a difference of opinion over accounting policies—a disagreement in which two Big Four firms, Deloitte (Autonomy’s auditor) and Ernst & Young (HP’s firm) agree that there is nothing wrong with the pre-acquisition financials. 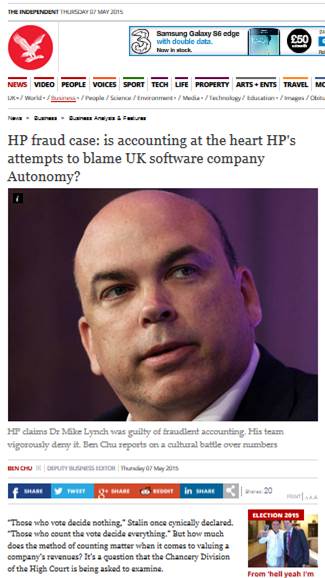