Information from the former management team of Autonomy plc.

HP today published an email from former Autonomy CFO Sushovan Hussain to former CEO Mike Lynch, from 10 December 2010, which it claims is evidence of a “CFO in panic” about the performance of the business. It contends this situation caused Mr Lynch to decide to sell the whole company to HP.

This email is taken wildly out of context, reflecting the CFO’s frustrations about the forecasting by parts of the sales force, and how that tracked against internal forecasts. HP has purposefully not shown other emails in the series, showing that Autonomy was on track to meet its expected revenues for the quarter, and indeed did so.

Analyst expectations for Q4 2010 were for revenue of $241 million. The following email shows that the forecast for Q4 on 13 December, despite the concerns in the U.S. identified on 10 December, was still $252 million:

The final result for the quarter came in at $244.5 million, reflecting the fact that some of the revenue had not come in as indicated in the mail of 10 December, but still ahead of market expectations. Below is a copy of the final financial statement that was released to the market: 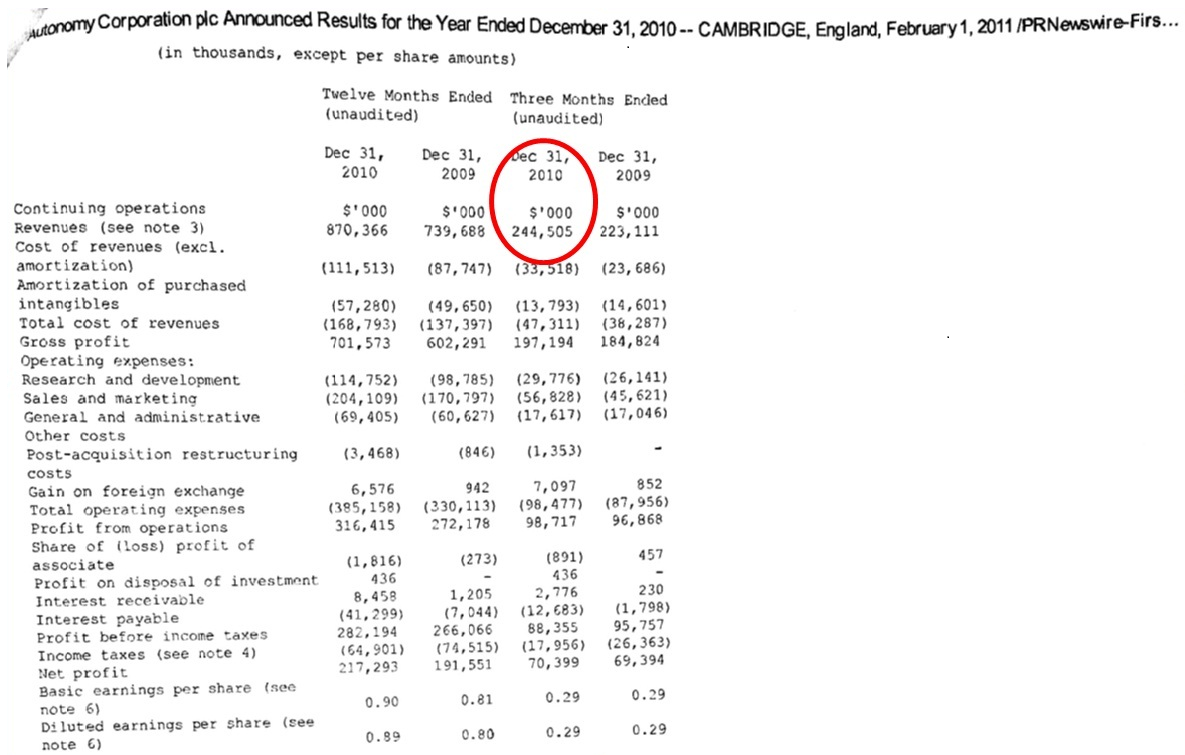 HP is taking an isolated incident to try to paint a picture of a company that was in some way in trouble. The email it has posted actually shows that Autonomy was trying hard to beat market expectations by a significant distance, and the frustrated overreaction of a stressed executive to the management of its internal sales forecasts. It has overlooked the fact that Autonomy delivered on market expectations, and the revenue was converted into cash.

Further, HP is suggesting that this situation led Mike Lynch to take the “radical action” of selling the whole company to HP. This is insanity. Not least because HP had already approached Autonomy about buying it!

This approach by HP is shameful and purposefully misleading. The full facts show that everything was handled properly, nothing was hidden and Autonomy was a strong business performing well. It is HP’s allegation of a “multi billion dollar fraud” that is imaginary.